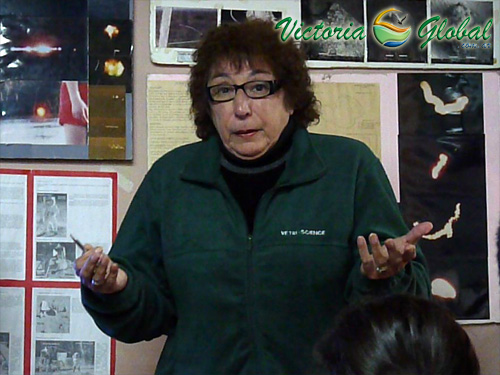 The UFO Museum was born in Victoria in January of 2005, with the finality to inform to the common people about the investigations of the staff of the group «Vision Ovni». After a few month of work, Silvia Simondini, the Director of the museum, received the bibliographic material of a renowned UFO researcher Nicolás Ojeda, who got retired of the investigation field after 40 years of work.

Since the beginning, the people found a right place to tell their experiences with the UFO phenomenon, and also to inquire and get more information. Books, magazines, papers, photos, videos, and pieces of material that come from space can be seen in the museum.

Among that, Silvia Simondini is a field researcher, has the collaboration of many professionals in the analysis of the material that the team frequent recollect and she also have had lots of visual contacts with strange lights.

Since 1991, a curious phenomenon has taken the attention of the people: the sighting of Unidentified Flying Objects.
However, these experiences started since remote epochs.
The oral tradition, mixture of superstition and reality, talks about strange lights in the nocturnal sky.
A remarkable testimony, is given in 1956 by the priest Gregorio Spiazzi in his book “El País de Los Chajás”: “… now returns the hunting bark, sailing up water trough the stream “La Camiseta”.
The boatmen, seated on the gunwale, with the bust rudely bended, have concentrated again in a harsh, gloomy muteness, only cut it sometimes by some monosyllabic dialog that is immediately dissolved.
Suddenly, Don Quelo points out with his heavy arm, at a distance, over the shore, a scarlet splendor.

-Do you see?
-We see…
-A fireside?
-I think it’s a light…
They continue in silence.
Turning a curve of the brook, next to a group of river plants, the embarkation stops.
Don Quelo nails his knife vertically on the forecastle and look, using the still blade as a sight.
-Does it move?- inquires expectantly Don Tano.
-No it doesn’t.
-So, it must be inside a settlement.
-There aren’t settlements around this place- affirms Don Cleme.
– There aren’t settlements- ratifies, at the same time, Don Tano and Don Quelo.

The light is bright, trembling with a copper-colored, round like a balloon, and seems to be suspended above the air, a few yards from the ground, over the opaque bottom of the night.
While they advance, it becomes more neat and clear. The bargemen’s pupils shine with a strange anxiety, in the darkness, like in the stupefaction of a mystery.

There is a pause, a lugubrious silence, like if suddenly everybody felt the fly of a bad augur bird, passing over their heads.
The boat slips softly and quiet, close to the shore. The reed imitates green forms over the boat bands. The fastenings of the oars, the frizzle in the tholes, have a moan of sob.
Suddenly, the light rises in the night, just like if someone untied it. It maintains itself calm, for a few moments. And then, in a very fast fly, skirt along the lagoon; and, reaching the start point, the light submerges like a lightning into the water, and it vanishes completely.
Don Quelo crosses himself. Don Tano crosses himself. Don Cleme crosses himself.
-Blessed soul that goes in pain, I hope God forgive you- whisper with a solemn voice Don Severo, crossing himself too…
They pass now in front of the place where the light was.
No trace of what happened: not even a sign of a person in the coast mud, and no rest of a fireside.

-The same thing was seen before the big inundation of the fourteenth- takes notice Don Severo.

And continue the story, just like if, in front of his eyes, was taken away the curtain of an old nightmare:

-I can still see it…
It had been a night like this.
The sky was dark; the river was dark; the island was dark.
Don Severo was on board of a fishing boat, those that fishes late at night, when the big fish go out hunting.
They were six men, courageous all of them; men of water and island.
The night fishers put the web and descended on mainland, where they kindled a fire under the protection of a hollow.
Suddenly, they seemed to feel a rumour of smooth steps from someone who crossed near beside them; and, at the same time a pitiful lamentation, like if someone was crying.
However, not even a stem was moving in the motionless prairie; and, trough the fire splendor, were only seen the six fishermen sitting on the ground, while they were drinking mate and poking the embers.
They stood up to watch… And they saw, advancing by the river, with incredible speed, a fishing boat, that had in the top of its mast, like a red flag, a powerful light balloon.
There wasn’t engine noise or oars beating. But the red balloon colored the whole river with bloody reflections, and lighted as far as could be seen the loneliness of the night.
Taken by surprise, they ran to pick up the web in order to give pass to the strange embarkation.
But when they finished, in the moment that the powerful light seemed to assail and dazzle them, the light unexpectedly turned off. Nothing else was seen or heard during the rest of the night…
They weren’t slept or drunk. They were six men of water and island. And each one of the fishermen could swear that their eyes didn’t cheat them”.
In the early 90’s, the big number of visual contacts obtained the interest of national and international mass medias after local journalists recorded amazing images of the flying objects.
Nowadays, local field investigators such as Silvia Simondini, Andrea Simondini and Néstor Gaioli are still collecting evidences about the existence of these mysterious visitors and developed an UFO Museum where people can see pictures, videos and materials concerned to this subject.

The primitive habitants of Victoria